As my senior year of high school began to slow down and the college hype began to increase, I looked for simple projects to work on while in the midst of the craziness. Thinking that it had been a while since I had made anything relating to artificial intelligence, I wanted to refresh my mind on Neural Networks and machine learning in general. Since I needed a game to attach an AI to, I naturally thought back to my Ludum Dare 33 game (linked here), as it was a rather simple game that wouldn’t be hard for a computer to master.

I used a Neural Network (read more about Neural Networks here) with 2 input nodes (one to tell when an arrow was close and another to tell when a house was close), 2 hidden layers of 5 nodes each, and 4 output nodes (controlled each of the 4 keys required to play the game: punch, block, jump, move right). The activation function was again a sigmoid (1 / (1 + e^-4.9x)). I used a genetic algorithm with a 10% mutation rate on each gene passed down in order to weed out bad Networks and incentivize growth of good Networks. 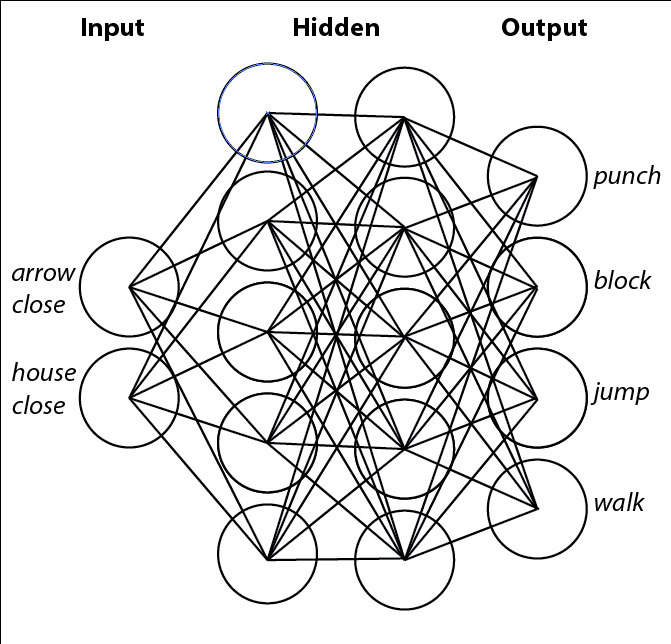 Graphic displaying the structure of the Neural Network I used for this project. Inputs were either a -1 or a +1 depending on whether or not its specific object was close (-1 for false, +1 for true). A key was pressed if its respective output value was > 0.5 (the range for the sinusoid I used was (-1, 1)).

Despite my belief that my game was easy, initial runs of the simulation proved that although scoring points was easy, there were too many ways to earn points, which confused the networks. The Networks easily figured out that moving right was a good way to earn points as points were given based on how many civilians are squished, but it had a hard time figuring out that it could squish civilians longer if it blocked arrows. However, after many many iterations, Networks could generally figure out a better strategy for scoring (whether it be jumping on houses to destroy them or blocking arrows). Despite the Networks learning how to score points better, I have yet to see a perfect strategy formed (one that jumps on houses AND blocks arrows), which may be solved if I ran more iterations of the simulation.

Starting out you can see that it doesn’t do anything. Usually, if it does anything, it holds down random keys, causing its actions to be sporadic at best.

After ~5 minutes of the simulation running, the AI finds out that walking right is a good strategy for getting points.

After a considerably long time, the AI has figured out blocking is a good combo with walking, as it can walk longer distances than if it wasn’t blocking. However, it hasn’t found out that destroying houses is a good source of points.

All in all I think this was a great refresher for AI. Since I’ve been mostly working on games these past few months, it was also a good break from the grind that asset creation is becoming. Also, learning that machines aren’t always as bright as I may think they are is a great lesson to take going forward in my AI career. If you want to see the code for this you can see it here: https://github.com/mccloskeybr/LD33