As my previous post (linked here) eluded, this is the second and main project I worked on during the latter half of my summer break from Virginia Tech. Described shortly, this project is a stock market tracker of sorts for the game Animal Crossing: New Leaf (ACNL) that is able to run from any handheld Android phone. My main focus for this project was introducing myself to the world of app development, mainly following various tutorials online and playing around with the Android Studio IDE. As such, the actual logic behind this project isn’t too difficult to grasp. As I’ll get into, the stock market in ACNL is rather simple and follows a strict set of rules. Thus, I mainly focused on making the user interface as fluid as possible, to ensure ease of use and practicality while keeping the function of the app in mind. 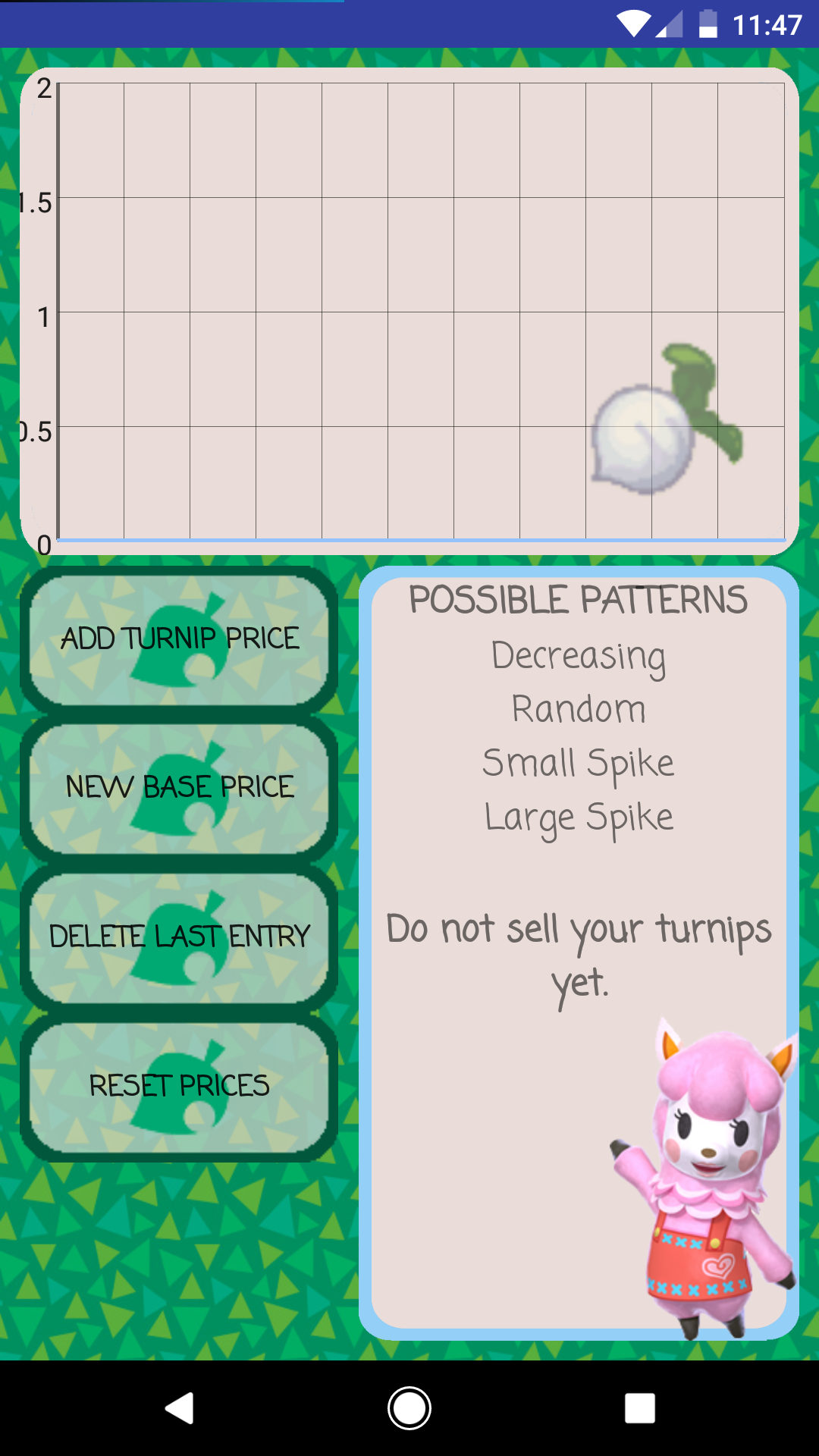 What the app looks like when you open it for the first time. I put a decent amount of effort into ensuring the app looks somewhat decent and is easy to use. Note, all pictures shown here are screenshots taken on my Google Pixel.

First, onto the basics of the stock market in ACNL. Every Sunday, the player can buy Turnips from a particular NPC that visits the town. The price for that particular set of turnips can range anywhere from 90-110 bells (the currency of ACNL). Then, throughout the week, the selling price of those turnips changes depending on the particular pattern for that week. The prices change twice per day (at store-open and 12pm), with the turnips rotting at exactly 6am on Sunday. Thus, the player must guess when he or she should sell all of the turnips they purchased for that week to ensure maximum profits. This is where my app comes in. The user is to enter every price update in-game into the app. Then, when prices are optimal, the app recommends the user to sell all of their turnips.

There are 4 patterns the stalk market can have for any given week, each with its own set of rules that makes it easily distinguishable from the others. Of the patterns that produce positive returns, the player is first tempted multiple times with above average selling prices before the maximum price is observed. The biggest example of this is the big spike pattern, where there are 2 above average prices before the best price, often double that of the previous prices, is observed. My app guesses which pattern is most likely for the given week/set of values, and warns against selling your turnips until it thinks the highest value for the week has been achieved. There is only one pattern in which the player is guaranteed a loss. If you’d like to read more on the various patterns and their strategies, I would recommend visiting this page. 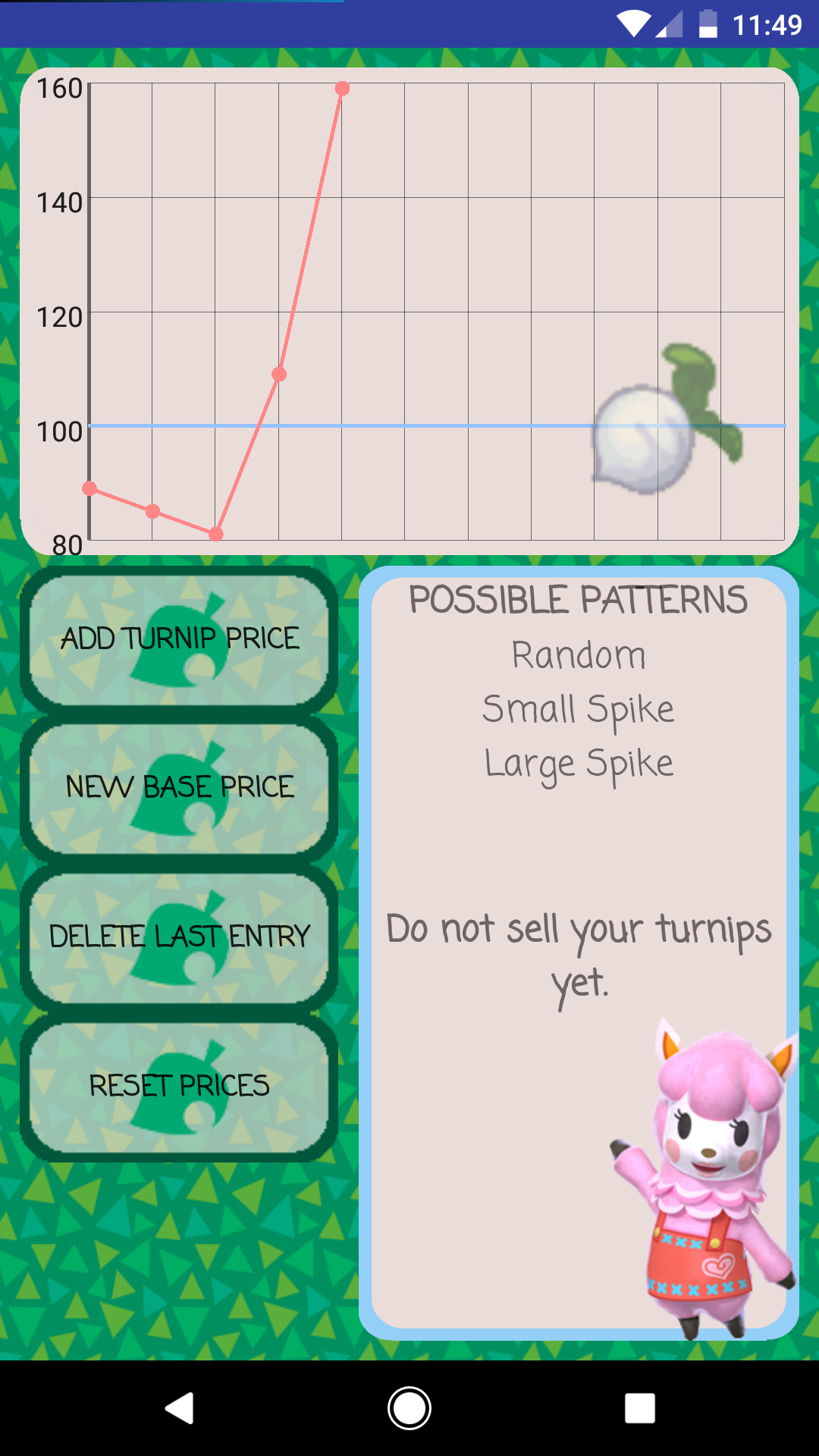 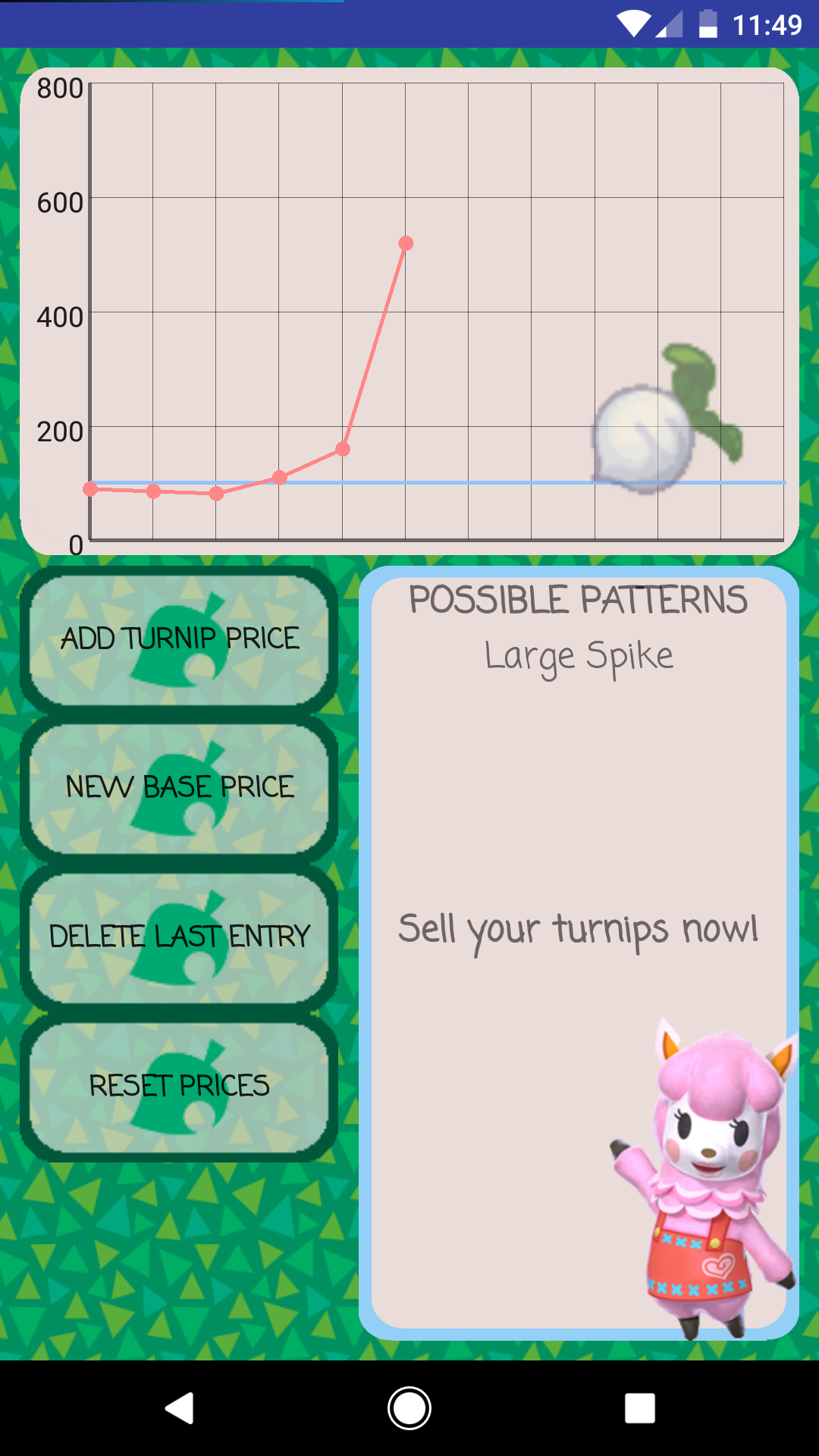 Though the turnip price in the first picture is much higher than the purchase price (labeled in blue), the app recommends waiting, which pays off with a week-high price 3 times that of the previously shown price, as shown in the second picture.

Once the logic was finished and patted down, I moved onto the user interface portion of the app. The only non-native library I used was GraphView for the plot of prices seen on the upper-half of the screen. The main challenge when coming up with the UI for this project was where to place the buttons and text box in relation to each other and the graph. I ended up with the current design, as I think it looks and feels simple and easy to use. One of the previous designs had all of the buttons underneath the graph in a 2×2 grid pattern, which failed due to the strangeness of fingers as a cursor. Sometimes, I found myself pressing the bottom right button when I meant to press the upper left button, among other similar problems. I’ve found that the current vertical design is a clear and easy solution that wasn’t difficult to implement. Other than button placement, I used in-game and fan art (the background, turnip, and animal figure) for decorating the app. If I were to publish this on the Play Store, I would first want to draw myself or enlist the help of a friend to redraw all of these assets to ensure I didn’t steal content from their creators. As such, you will not be able to find this on the Play Store as of yet. However, if you email me saying you want to put this app to use, feel free to and I will post an app that falls within these guidelines.

This project was fun to explore. I learned a whole lot about Android app development, and created something I can put to use in my future ACNL endeavors. If you’d like to look at the source code, you can see it here.