As my senior year of high school began to slow down and the college hype began to increase, I looked for simple projects to work on while in the midst of the craziness. I spent a while sitting back and looking at the projects I’ve finished this past school year and remembered a couple of other projects from other people that served as inspiration for my personal projects. Since I learned everything I know about AI from watching lectures and demonstrations online, it was a trip down memory lane to go back and watch those videos in particular. One of the projects I looked back at was a machine learning algorithm that used reinforcement learning for Flappy Bird (A popular mobile game), and I remember being amazed at the actual process of learning that the algorithm went through (see that video here). I decided to challenge myself by making my own Flappy Bird AI to benchmark my current progress, especially in comparison to where I was 6 months ago.

First, however, I had to make a Flappy Bird clone. Making it was surprisingly easy, as it has simple rules and doesn’t require a lot of complex algorithms. Flappy Bird is essentially an endless runner, but the player must tap the bird to fly precariously in between pipes (if the player touches one of these pipes they die and have to start over). Since this was just a quick project, I didn’t bother with making images to go over each of the objects, instead using colored rectangles. The blue rectangle is the player, the black rectangles are pipes, and the green rectangle is the ground.

I used my standard Neural Network algorithm with a genetic algorithm for the machine learning AI (read more about Neural Networks here). It uses 4 inputs – the player’s y position (height from the ground), the y positions of the opening between the closest pipes (the lowest point on the top pipe and the highest point on the bottom pipe), and the horizontal distance between the player and the closest pipe. There are 2 hidden layers of 5 nodes each, and 1 output node (if the output node > 0.5, the bird jumps). I used a sigmoid function (1 / (1 + e^-x)) as my activation function. Reward was based on the score at the end of the run and how far the AI moved the bird to the right.

Now onto the results. It actually learned to jump between pipes fairly quickly, but difficulty came when it needed to jump with precision between the pipes. However, after a little bit of time, it mastered the game perfectly.

Start of the simulation. You can see the AI has trouble handling its own jump height.

After about 10/15 minutes of runtime, the AI has mastered the art of jumping in between the pipes.

I enjoyed making this project and seeing how far I’ve come. A while ago, I never would have thought I would have been able to make something like this. If you want to see the code for this project, you can get it here. 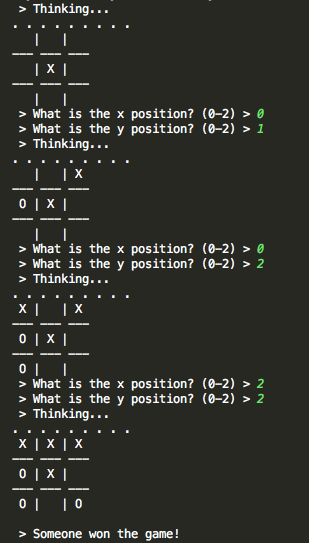