After using VT’s cluster for so long, I was interested to learn how the computing behind it worked, and decided to make my own cluster of Raspberry Pis. I contemplated the benefits of embarking on such a project and came up with a multitude of experiments I was interested in exploring that would benefit a cluster-like structure, of which include password decryption, simulation for genetic algorithms, and more. What really tipped me over, however, was the already written and free to use libraries MPI and MPI4PY, of which allowed me to use python to write easy to understand and easy to implement code that utilized cluster computing. Thankfully I had a lot of the components on hand already, but I estimate the overall cost to be around $270. This includes the cost of 4 Raspberry Pis, 4 8gb micro SD cards, a stand for the pis, an ethernet switch, 5 ethernet cords, a USB hub, and 4 micro USB – USB cords. There’s a great video series by Tinkernut on Youtube that I used for basic reference when configuring my Pis that I’d certainly recommend you follow along as well if you have any difficulties putting one of these together. If you have any questions about any of the components I used to build my cluster, feel free to email me at [email protected]

For my cluster, I used 4 Raspberry Pi 3 B boards, each running a distribution of CentOS 7 Linux. I decided to use CentOS 7 over a friendlier version of linux (i.e. Raspbian, a distribution written specifically for the Pi), simply because VT’s cluster also uses CentOS. Each Pi is given power and connected to an Ethernet switch that is also connected to my router so I can ssh into each of the nodes.

Picture of my cluster

I have the Pis set up in a master-slave system, in which the head node takes one big problem and divides it into smaller problems for the slave nodes to compute. This allows me to, say, run genetic algorithm/ANN simulations on the slave nodes while performing breeding and fitness evaluation on the master node. I definitely plan on experimenting with speedups in regards to AI in the future, so be on the lookout.

After building my cluster, I found it fitting to at least write a short piece of test code to see how much the cluster structure sped things up. I decided to time Leibniz’s Pi approximation to the 100,000th term on a single worker vs. all three workers. You can see the results of that experiment below. 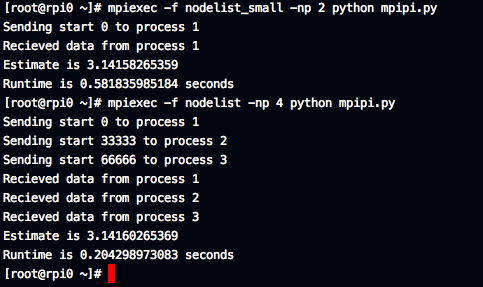 You can see that the test in which I only used one worker (nodelist_small), the runtime was approximately 3 times as large as the runtime when I used 3 workers (nodelist), which is to be expected. You can also see that the estimates are slightly different, though I believe this error to be a result of integer division losing some information when divvying up the work for slave nodes (As this is just a small test, I’m leaving this error for now). You can get the code for this test here.

This was an incredibly fun and practical project to work on during my Thanksgiving break. Definitely be looking for more updates from me as I begin to experiment more with the cluster and what it can do. Hopefully I can run some experiments before my next break, but as exam season is coming up, I may need to focus more on my studies. If you have any questions or comments, feel free to email me or leave a comment.

When idle, my cluster is aiding the BOINC sponsored [email protected] project. I chose this over other BOINC projects mainly due to it’s friendliness towards ARM processors (of which the Raspberry Pi uses).